Investing in Europe’s Next Generation

by Investing in Culture

As the EU has started discussing the proposed recovery plan, 94 organisations from across Europe’s cultural and creative sectors are uniting their voices to alert EU leaders: our sector needs strong and systemic support measures to recover from this crisis.

As it is now well understood, the cultural and creative world is one of the first and hardest hit by the crisis. According to the Commission’s own estimates, some parts of our sector – which accounts for €509bn in value added to GDP and over 12 million full-time jobs – are expected to lose up to 80% of their turnover in the 2nd quarter of 2020.

We have a higher than average percentage of self-employed workers, freelancers, micro-businesses and youth employment, which makes us particularly vulnerable in times of crisis.

As the European economy is slowly restarting, it is far from business as usual. Cultural actors are gradually resuming their activities, but all have to implement strict safety rules which means they won’t be operating at full capacity for the foreseeable future and are therefore facing challenging economic decisions. From individual creators and creative workers all the way to big production and media companies, the whole value chain is impacted.

And yet the recovery package announced by the Commission on 27 May does not reflect the reality of the cultural and creative sector, despite the encouraging messages by the Commission and the strong position taken by the European Parliament. The proposal on the table falls way short of our sector’s expectations:

To bring the EU’s support for our sector to a level that is commensurate with its contribution to the EU’s economy and its citizens’ wellbeing, we call on Member States and the European Parliament:

Let’s invest in culture to show the EU’s #NextGeneration

that we really care about their future!

9. CEPIC – Centre of the Picture Industry

18. EFJ – The European Federation of Journalists

54. FSE – Federation of Screenwriters in Europe

55. GESAC – European Grouping of Societies of Authors and Composers

72. ISCM – International Society for Contemporary Music on behalf of the 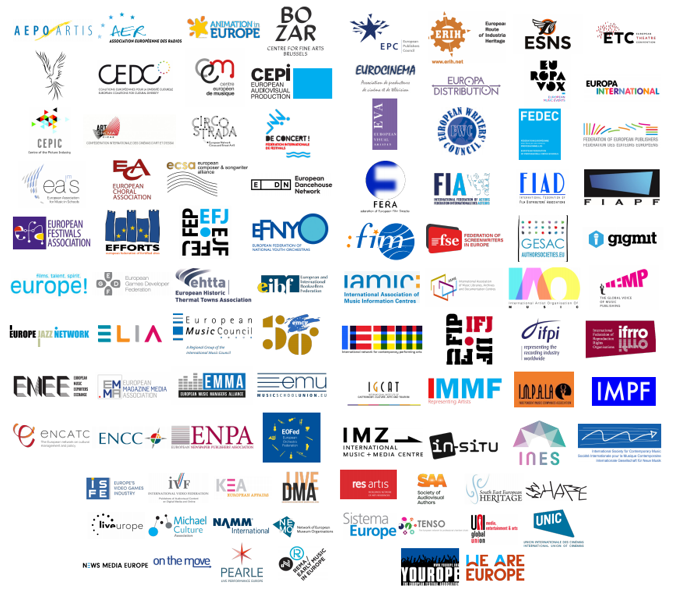